As I have reflected on Leslie’s death over the past few days, I am realizing just how much I miss blogging on a regular basis.  When I took a step back from blogging four years ago, it was because I was a newly-called pastor in a very small town trying to figure out boundaries that would work for me, my husband and my church.  While I have in no way figured that out, I do miss the wonderful community I had in my little corner of the world wide web.  So in honor of Leslie, I am going to reignite my passion for blogging about life, ministry and the pursuit of God’s grace in the midst of my imperfections.

So let’s talk about last Sunday, shall we?  SPOILER ALERT:

The Youth Group took part in a Week of Service last week and – in lieu of preaching a long sermon – I decided to interview a few of the kids to reflect on their experiences.  The lectionary gospel was the loaves and fishes story from John and it actually tied in perfectly!  I preached on the idea that God’s abundance can come out of something that seems small to us – and how even though we did short days of local service (instead of a big mission trip), we still were able to have a large impact.

I love visuals in worship so it was always in the back of my mind that it would be fun to fill the altar with fresh-baked bread.  So when a group of us went to the driving range on Thursday and one of the girls in my car started talking about baking bread, I “casually mentioned” (in the most blunt way possible, ha!) that I was looking for someone to make bread for Sunday.  Thankfully Sarah was all about jumping on board with my crazy ideas.

It must be something in the name.

So Sunday morning Sarah’s husband Jason walked in to my office with a basket of freshly-baked bread.  Actually the aroma arrived first.  Do you know how distracting it is to lead worship three feet from carb heaven??  Good gracious.

I had set the basket and fabrics up earlier that morning, so it was just a matter of adding the bread!  Very, very easy.

And do you want to know the best part?  I motioned for Bruce to come up to the pulpit during the closing hymn and told him to grab a knife from the kitchen.  Yes, we totally cut into those suckers as soon as the final “Amen” was said.

Actually, many, many more “Amens” were said after that.

The funny part about this altar is that the story was loaves and fishes … and I only had the loaves up there.  I had joked with Bruce that I needed him to go fishing before church so that I could throw a fish or two into the mix.  Turns out the tides were right and his alarm went off at 3 am that morning …

… by 7 am I was at the church and he texted me this pic.  Instantly I had this hilarious image of him and his buddy Marc marching into the sanctuary during the opening hymn and plopping a ginormous fish on the altar.

Thankfully it was all catch and release that morning.

Somehow I don’t think the aroma would have been the same.

Let’s continue making our way through Holy Week, shall we?  I love that I can chronicle my crazy journey through ministry in this space – if it only means that I can look back on it next year when I’m out of ideas and pulling my hair out!

We had one mid-week Holy Week service – Maundy Thursday Worship & Service of Tenebrae.  Because we were telling both the story of Jesus’ last night and his death in one service, I wanted to find a way to honor both stories.  So here’s what we did … 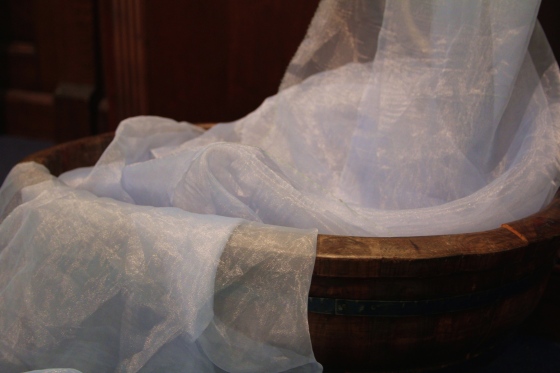 I set up the altar to tell the story of the foot washing.  New Englanders aren’t big on actually participating in a foot washing (not yet anyway!) but it is such an important story to tell.  I read the the story before communion and before I started I said something akin too:

“Our first scripture reading tonight comes from the Gospel of John.  It tells the story of Jesus washing the feet of his disciples, a story we see displayed on the altar.”

That added a really nice depth to the story!  It just kind of reminded people of what they were listening to before I started.

Follow this reading, we sang a hymn and then shared communion.  This is how I had the communion table set up!

I don’t have a great photo of this because I kept the platters of cheese and grapes in the refrigerator until right before the service started (food safety > altar design).  By the time we brought out the platters there were people in the sanctuary preparing for their worship experience and it wouldn’t have been appropriate for me to pull out my big camera.  Essentially I covered the communion table in black fabric and then made a runner out of purple fabric.  I put risers underneath the fabric so the platters would be at different heights and there would be some depth to the table.

After communion we stripped the altar.  Here’s how we did it!

This all went much faster than it reads, I promise!  It did not last much longer than the hymn did, actually.

While the Deacons were reading the Service of Tenebrae, Bruce and I quietly cleaned up everything in the narthex.  We did the traditional extinguishing of candle / dimming of lights after each reading and at the end sat in dark silence.  After a moment of darkness, one of the Deacons walked up to the altar and lit the Christ candle – this signaled a quartet to gather around the piano for a beautiful a capella rendition of Amazing Grace.

It was a wonderful service!  I was anticipating 30-40 people and we had 52 – I was so pleased!  This is always one of my favorite services and I am so glad there were so many people wanting to experience it too.  I have some liturgy that I wrote that I will share later in the week (it’s trapped on my computer at church at the moment!).

Up next – Easter Egg Hunt pictures!

Okay, that’s a lie.  It was actually two shades of purple.

But I kind of loved it anyway.

I was really fighting with the altar this week. I was running out of time, it was getting late on Saturday night, I had a million other things on my mind and I was super frustrated. I actually had something completely different set up, but then Jon’s voice popped into my head: “Less is more.”  I ripped everything down and started over.

I ended up just keeping it simple.  Deep shades of purple fabric cascading down with the palms on top.  I actually usually put a candle in that jar with the palms in it, but it looked neat with the palms.  I turned a wooden basin upside down underneath the fabric so the palms wouldn’t be on the ground.

One of the biggest problems with having the altar on top of the platform the way ours is set is that if you put something on top of the altar, most people can’t see it.  So when you are creating your visuals, you really need to either build up off the altar or down the front.  Last year I had a beautiful pathway to the cross, but looking back I’m not sure anyone except me and whoever the worship leader was could really appreciate it.

I was in the sanctuary this afternoon starting to set up for Thursday and am trying to use the same “less is more” philosophy. Our space isn’t that big, so a little really does go a long way.

Blessings to all of you as continue your journey through Holy Week! May it be filled of reminders of the resurrection – in ways both big and small!